Ord! We have learnt with some sadness that Troy Hewitt, Community Director and Producer with Carbine Studio was handing on the torch.

WildStar fansites have been shaken by the announcement that Troy "Aether" Hewitt was leaving Carbine Studio. Fans from the earliest stages as well as the youngest generation have expressed throughout the web their thanks to the one that had built an exemplary community policy.

"This is a sad new for the community" 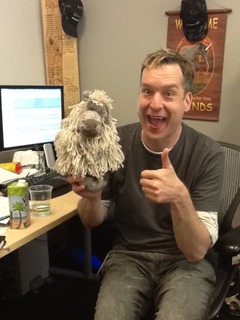 As it stands, this was probably one of the worst news that could be expected, as Troy Hewitt was not only in charge of Communication, but also from the very start, the main actor in building relation with the community.

When I met him in Paris in 2011, I was like many others flabbergasted by his aura. It only took one handshake to start a real friendship that lead us to share moments I will not forget easily. HIS festive mind was wide open, he knew how to put at ease his interlocutors whatever the circumstances.
I remember this instance that still make me smile when thinking about it:

On the 1st of April of this year 2013, I was at Aliso Viejo for a visit of the studio along with a few other journalists. We were waiting at the entrance of the studio when I noticed this image - that had gone viral on Facebook - of Troy’s cut-out face, glued to the window of one of the offices. While I was bending to have a closer look, Troy popped up behind me, smiling widely at the joke. This is a mere example of the kind of relationship he used to build with everyone, whether staff, journalists or community members. All benefited from those moments of real fun. 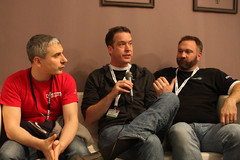 In actual fact, we owe him a lot. Always ready to encourage community initiatives, he made sure he was surrounded with the best. His collaboration with Robert Land initiated the concepts of WildStar-Wednesday, a weekly publication focusing on various aspects of the game and the latest Wildstar news, and WSuplink, forum dedicated to MMO across social networks.

Very soon after, Loïc Claveau joined the team after suggesting to involve members of the public in the conception of Metal Maw during Gamescom 2011. Then came David Bass, who was able to handle very direct interaction with the public, especially in the case of beta-tests.
At a later stage stepped in the European team with a free hand over the implementation of original events — such as PiFW (Pay it Forard Week) — that we hope will come back soon.

Throughout these various events, Troy Hewitt has acted both as a federator and a catalyser. He was always keen to listen and act accordingly, even if it meant knocking on the door of developers to make them interact with his interlocutors, which lead to some captivating Wildstar-Wednesday. His interventions will also be remembered, for example during this AMAA that he had left for a few minutes after having read the question of one of the participants:

I just turned around to ask the Combat and PvP teams if they found it offensive that I believe that expert players can often know more about how a system functions than the Designer that created it, and they unanimously said "Nope, not offensive, because it's true."
So there you go. We are all in agreement!

Or those moments when he did convey with subtlety that one shouldn’t expect everything from the developers.

Yeah, we agree with that sentiment as well, though our question to you is the following: Does dungeon finder need to be the tool for building relationships on your own server?
We tend to think that providing a useful set of social tools for you to engage and connect with people on your server may be a more important investment of development time.
The goal with cross-server tools is to get you to the action faster than your server population may allow.
I'm really interested in your thoughts on this. 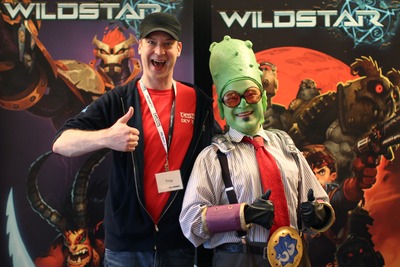 There were moments of gloom during this summer 2013. Troy Hewitt has been through difficult times during a few months, and it is probable that the sad events he went through lead to a certain lack of communication from Carbine Studios. This seems anyway to be the reason of his quitting that will be officialised on the 25th of October.

His departure leads to the arrival of three new recruits in Carbine’s community team.

To be honest, I believe that Aether is irreplaceable; this being said, thanks to what he has already built and also to a strong team including Loïc Claveau and David Bass, and Mélanie Corolleur and Akli Amichi on the community team’s side, we can hope that things won’t come to a halt and that WildStar will remain WildStar.
For the moment the whole JOL-WS team wishes all the best to Troy Hewitt, we do want to thank him very sincerely for all his achievements.

While I’ve been in the community building business (more years than I care to admit), I’ve had the opportunity to work with some of the most innovative, creative, and talented people in the industry.

And while I’ve loved my prior jobs, and their resulting communities, I have to admit that what we’ve been able to build around WildStar is nothing short of incredible. Over the last five years, I’ve had one underlying philosophy that has defined everything we’ve done on the community front: Promote authenticity.

To me, that means honest dialogue without a spin. It means admitting when we’ve done something wrong, and clearly communicating what we are doing to address the issue. It’s meant engaging in forthright communications with the people that make up the WildStar community to identify the things that matter, and find ways for our team to discuss, understand, and adopt them without getting in the way of the conversation.

I’d like to believe that if you were to stack our developer interaction against any of the other game development companies out there, the Carbine team, from developer to artist to programmer, has connected with our community in a way that is unprecedented.

I’d like to say this was a difficult process, but when you work with a team that genuinely loves what they do, it’s pretty easy to coax them into connecting with our fans. In many cases, it’s more challenging to keep them from oversharing. I’m looking at you Jeremy Gaffney and Mike Donatelli. :-)

I’ve also had the opportunity to hire some of the most talented professionals in the business of building community. Atreid and Scooter love doing this as much as I do, and their talents and abilities have allowed us to build a passionate core community that has experienced firsthand our commitment to  listening.

And wow, what a community we have built. We’ve got fansites with true passion, working and collaborating together to allow everyone to feel inclusive, and you have all done a fantastic job for us on so many levels, that it would take me another 500 words to describe how much it has meant to me to work alongside you. You’ve been true heroes, supporting us far beyond creating beautiful websites and writing new and exciting takes on the WildStar information we’ve shared. You’ve even gone so far as to help us manage the crowds on the show floor at gamescom, PAX, and Comic-Con, educating new fans about WildStar, and just generally being superlative human beings.

So it’s with no small amount of heartbreak that I announce that I’m leaving Carbine. Without going into too much detail, recent tragedies in my family require that I return home to be closer to my family. It was a decision I can only define as agonizing, but in the end, my family needs me.

Please understand: I love this team and I believe that WildStar is going to be blockbuster game. I’ve spent five amazing years learning more than I could have ever expected from all angles of the business of making games. It’s an experience I’ll remember and value forever, working with people that have become more than coworkers, but lifetime friends. I will miss them terribly.

The good news is that I leave you in capable hands, with Loic and David in North America, and Melanie, Mark, Jan and Akli holding down the fort for Europe, your community team will be working even harder to build a connected and engaged community like none other.

Add to that the talents of three forever friends of mine and industry leaders in their craft, and you have a powerhouse of a communications team that will make sure there isn’t a person on this earth (and beyond?) that hasn’t fallen in love with WildStar. I’m of course talking about our new VP of Brand, Mona Hamilton, our Director of Interactive Marketing, Christophe Bahamed (who will be stepping in to lead our global community team), and our new PR Manager Michael Shelling ( a man I’ve had the privilege of working with many times throughout my career).

So while this is goodbye for now, I guarantee you that we’ll be playing WildStar together on launch day.

Thank you for all the laughs, the unending support and the inspiration. I can’t wait to see what you do in the coming months.

Until then, take care of my peeps, and enjoy, won’t you?

The community thanks Aether

Sad times in the WildStar community today, as Troy "Aether" Hewitt publicly announces his resignation from Carbine Studios for personal reasons. We here at WSC have worked closely with Troy over the last few years and wish him nothing but good things for the future.

I know I can speak for many of us in the community by saying, "Troy, safe  journeys and we'll see you on Nexus."

We would like to wish Troy "Aether" Hewitt the best and hope that whatever issues have drawn him away will be resolved with the best possible conclusion.

It's a sad day for the WildStar community. Carbine's Community Director Troy "Aether" Hewitt announced today in a post on the WildStar site that he is stepping down from his position and leaving the studio.

Other news about Aether's departure from Carbine Studios are being published as I type, and we know how sad everybody feel. I am also deeply grateful to Mrs. O'Sullivan for the help with the translation. 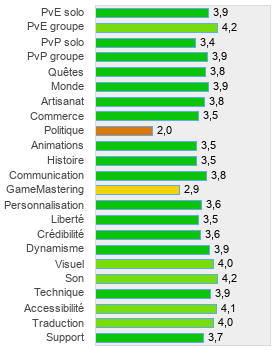